You may be surprised to learn that your favorite hikes may contain several common plants, insects, and other parasites that are toxic to dogs. Before you head out on the trail, be sure you understand which are poisonous, especially if you’re hiking away from home in an unknown area.

The information below includes some of the more commonly found toxins in North America that could be encountered on the trail. It is not an exhaustive list. Some items listed here are found only in certain regions, others are more prevalent across the continent. Rather, this serves to keep you aware as you go out on adventures and learn about the region where you plan to hike.

Water from Streams and Lakes

We humans don’t drink untreated water from lakes and streams, yet many of us allow our dogs to do so without a second thought. While dogs do have strong stomachs, they can still contract diseases like giardia, cryptosporidium, and leptospirosis.

The best way to avoid contraction is to provide fresh water for your dog when you hike. On longer excursions or backpacking trips, filter their water as you would your own. We use the Platypus GravityWorks Water Filter System or a SteriPEN Ultra Water Purifier.

I had never heard of salmon poisoning until I saw someone’s new puppy on Instagram fall ill after an experience in the woods.

Salmon and other upstream swimmers can become infected with a parasite called Nanophyetus salmincola, which is relatively harmless. It is when that parasite becomes infected with another called Neorickettsia helminthoeca that it can pose a problem. This disease is most common west of the Cascade mountains and only occurs in dogs.

If your dog is a wanderer, especially around fishing areas, then consider salmon poisoning if you notice any of the above signs. Left untreated, this life threatening disease can cause death within 14 days. Ninety percent of dogs die if not treated. With timely veterinary care, however, most dogs will show improvement within days.

This section will go beyond the obvious wildlife threats like bears, wolves, coyotes, etc. and mostly highlights the importance of knowing what threats there may be to your dog in a new place. There may be unknown dangers you’ve never heard of when you’re hiking somewhere unfamiliar.

When we moved to Spain, I had to learn an entirely new ecosystem and found there were several dangers to the dogs that I would never have otherwise known.

For example, during the spring in here (and other parts of Europe, as well) pine processionary caterpillars fall from their nests and create long chains across the trails. The caterpillars are covered in poisonous hairs are extremely poisonous to dogs and can cause necrosis and death in dogs.

Fortunately, these guys haven’t made their way to North America.

We also have another fun parasite called Leishmaniasis. Transmitted by a small biting sand fly, leishmaniasis is a parasite that causes two types of infections (skin and organ) and many dogs die from the contraction.

Rare in the US (and no reported cases in Canada), reports have been made from Texas, Ohio, and Oklahoma. If your dog is found to have leishmaniasis in the US, the case must be reported to the CDC.

Prevention methods include, unfortunately, using flea and tick medications containing permethrin and/or collars like Scalibor containing flumethrin or deltamethrin on a year-round basis.

So, what can you do?

There is a vaccine that helps decrease the severity of the reaction against some types of rattlesnakes. It is not a preventative measure, rather something that buys you a few hours. The protection last six months, and so regular boosters must be given to produce the antibodies.

The more ideal option perhaps is to go to rattlesnake avoidance training. What this typically looks like is a short session along a course with real rattlesnakes (either with the venom removed or wearing muzzles to avoid contact with the dogs). The trainer uses an ecollar to teach the dog to avoid the snakes.

Even if you are not in favor of the use of ecollars for your dog, consider which is better: a dead dog or a bit of discomfort to keep them safe?

If your dog is bitten by a rattlesnake, take them to a veterinarian immediately and follow these steps.

These gross critters are found pretty much everywhere around the world, though different types can spread different diseases. Of most concern are those which spread Lyme disease. These are known as the black legged ticks (or deer ticks) and found mostly in the Northeast and Upper Midwest in the United States.

Dog ticks are the most common type of tick and are widespread across the globe. As you may have guessed, they are found most commonly on dogs. They can transmit Rocky Mountain spotted fever, which is rare, but you’ll still want to remove the tick as soon as possible.

The best prevention is to use a flea and tick medication, or more preferable, something natural like Wondercide.

I also learned during a trip to Colombia that apparently sulfur consumption works. We stayed on a coffee plantation and only Dave and I were bitten by the mosquitoes. The owners swore that ingesting small amounts of sulfur (for animals, too) keeps the bugs away. If you’re keen to give it a try, here’s some more information on how to use it (talk to your vet first, of course).

As far as removing them, just get yourself a simple tick key and keep it with you on hikes and camping trips.

Because plants species vary across different climate zones, this list is not complete in any way. Rather this it includes common plants that are toxic to dogs. If you’re not good with plant identification, consider downloading an app to know whether a species you encounter is harmful to your dog.

That said, it’s not necessary to worry that every single plant your dog encounters on the trail will cause harm. Just know the ones to avoid where you frequent regularly and make sure your dog doesn’t consume them.

A note on foxtails

Foxtails are a type of wild barley that is most prevalent in the western US, though have spread across the country, in Canada, and parts of Mexico. Common along trails, they are most dangerous during the summer when the grass dries out and the seed heads fall easily off the plant.

The heads contain individual bristles covered in tiny barbs. The sharp bristles act like the spike we see in some parking lots. If you enter one way, you’re fine, but if you go in the wrong way, your tires are toast.

When these barbs latch onto a dog’s nostrils, feet, ears, eyes, and throat, they can cause serious damage, such as necrosis, seizures, lung infections, and death. Dogs with upright ears are especially vulnerable. Designed to burrow, There have even been reports of foxtails disappearing inside dogs bodies.

If you live in an area widespread with foxtails, avoid infested trails, keep your dog on a leash, and examine them as you would a tick after every outing. Take your dog to the vet immediately if you suspect they have one in any of the body parts mentioned above.

Sharing Trail Snacks with Your Dog

I am all for sharing people food with my dogs, as long as I know it’s food they can eat. On the trail, I bring along lots of bars or snacks that unfortunately, I can’t always share with my dogs. Selfishly, I am glad I get to have my favorite type of chocolate (that would be dark, 70% or higher!) all to myself!

Other common human foods one might bring along on the trail that shouldn’t be given to your dog include:

Toxicity levels vary among these different foods. Some require large amounts of ingestion, while others can deliver a punch in small doses. Side effects and symptoms vary depending on the food and quantity consumed, ranging from killing a dog’s red blood cell count, to liver and kidney damage, causing low blood sugar, elevated heart rate, and in some cases death.

If you suspect your dog ate something they shouldn’t, look up the symptoms and keep an eye out and contact your veterinarian.

Have you had the unfortunate experience of encountering something toxic to your dog on the trail?

Are there any harmful species where you live that I haven’t mentioned here? 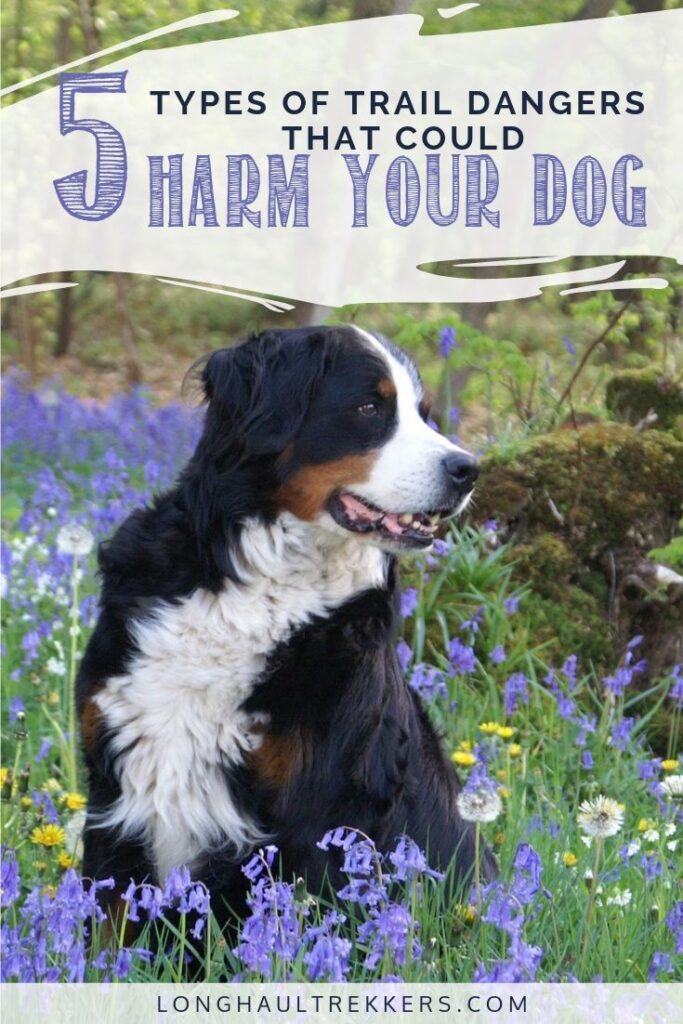 I would add toxic algae to this list. https://www.girlswhohike.net/news/understanding-the-toxic-blue-green-algae

Good point. Thanks for sharing.

Hey Jen, Did you see any specific sites for Utah or High Desert climates in your research for this article by any chance?

No, I didn't see any specific sites for Utah, largely because I was trying to be generic to appeal to most regions of the US. In the desert, you definitely have to watch out for rattlesnakes and water sources. I think the foxtail grass can be common in the SW because I know of friends in Colorado and Arizona whose dogs have encountered it.

Salmon poisoning is no joke! It is a big deal here in OR/WA with all of our salmon, trout, lamprey, sturgeon, and steelhead. We always have to be super careful to not lot our pups ingest any of the fish that wash up on the coast. Thanks for sharing all of this info!

Yeah, it sounds super scary! I never, ever would have known about it if it hadn't happen to the dog I saw on Instagram.